Hey! This is Michał Herda from the Krakow Chombo Club. Today I’m happy to show you a review of the riichi mahjong set from the online e-go.pl shop. The mahjong set cost me 269 PLN and contains tiles and accessories for playing Japanese riichi mahjong.

During the review, I’ll make some comparisons to a (somewhat heavily used) set made by the Polish company Grapet. 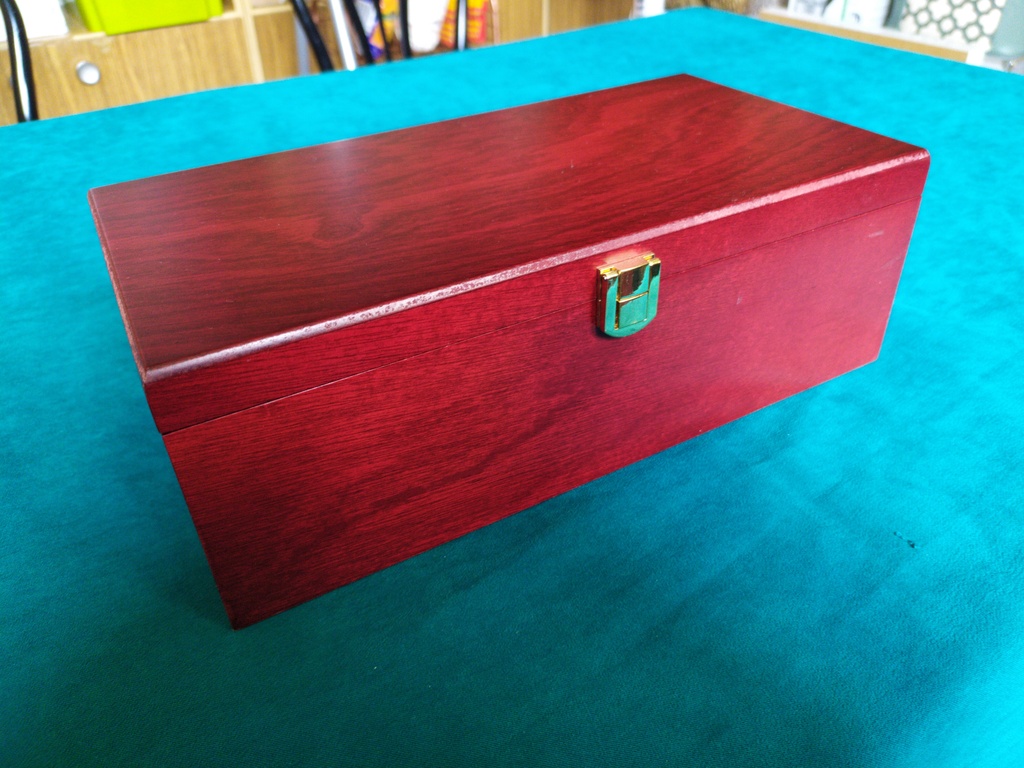 The first mentionworthy thing, which is the packaging, appeared right after the set’s arrival – I am used to mahjong sets packed in plastic suitcases, whereas here I ended up with a solid-looking wooden box. 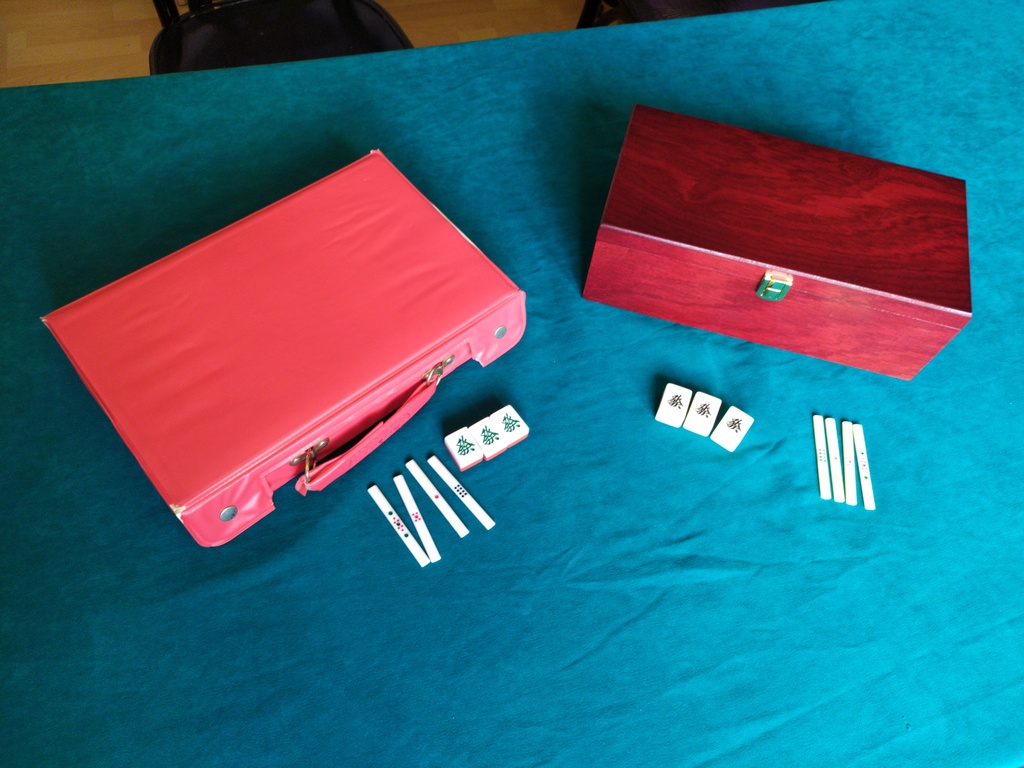 The reviewed set does not have any manual, which is a kind-of-a plus when comparing to the Grapet tiles (whose instruction should go straight into the trash bin as soon as the set is unpacked). Compared to the Grapet suitcase, the wooden box is somewhat narrower and shorter, but also much taller. 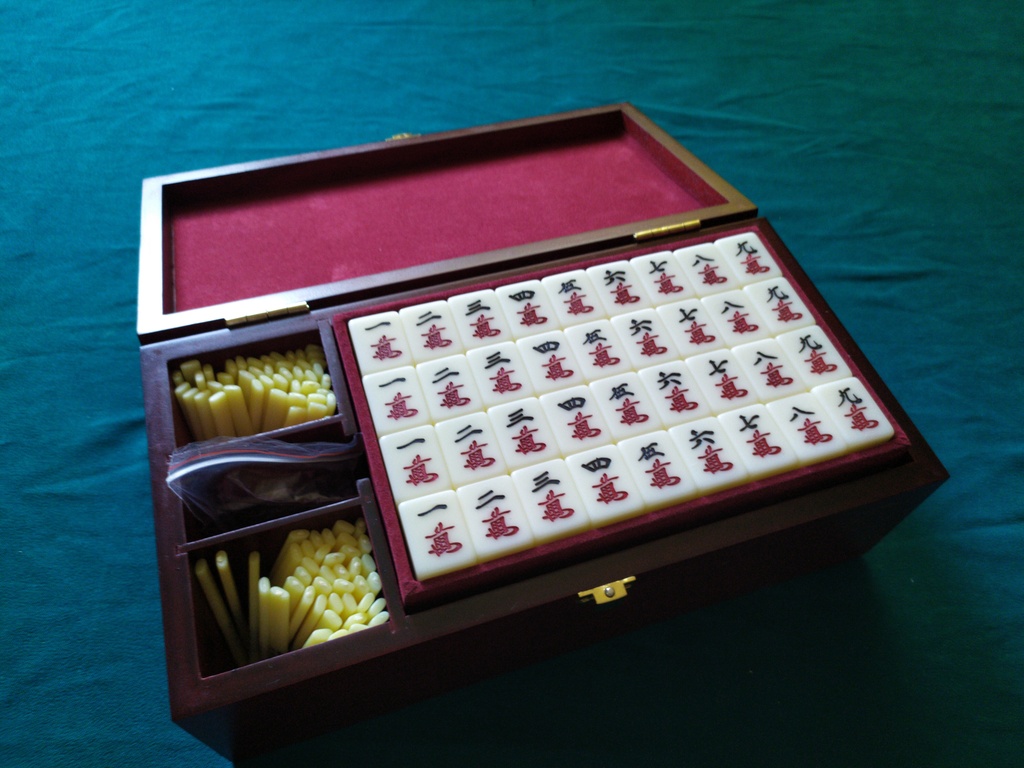 This is because, inside the box, all four tile trays are stacked one atop the other and not in two pairs, which is the case for most mahjong suitcases. 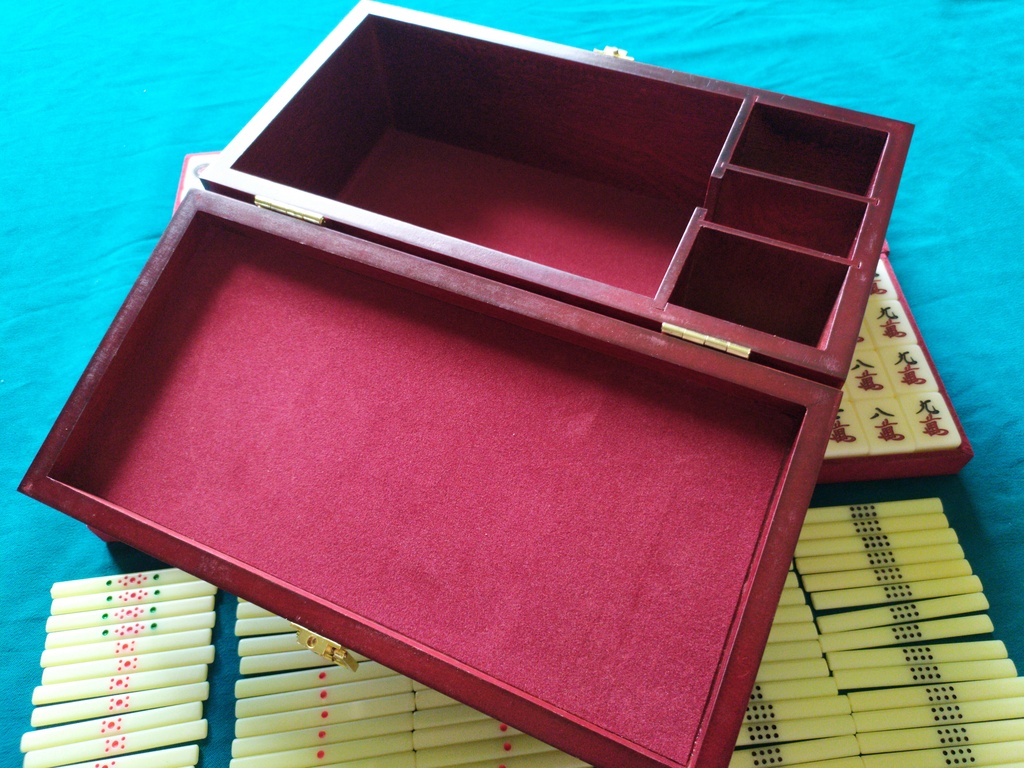 Additionally, the interior of the box is covered with red fabric, which makes eyes and fingers happy and gives the set a somewhat luxurious look. 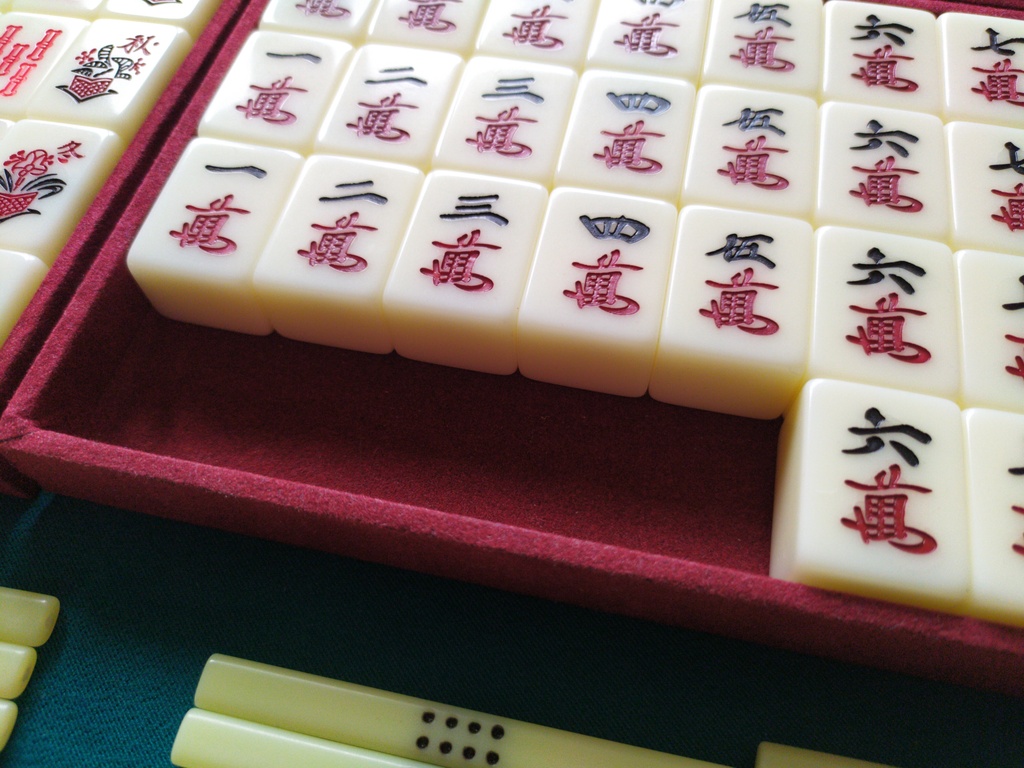 The trays are also covered with the same material, which also mutes the sound that the tiles (but not the scoring sticks - their compartments do not have this fabric!) make during transport. 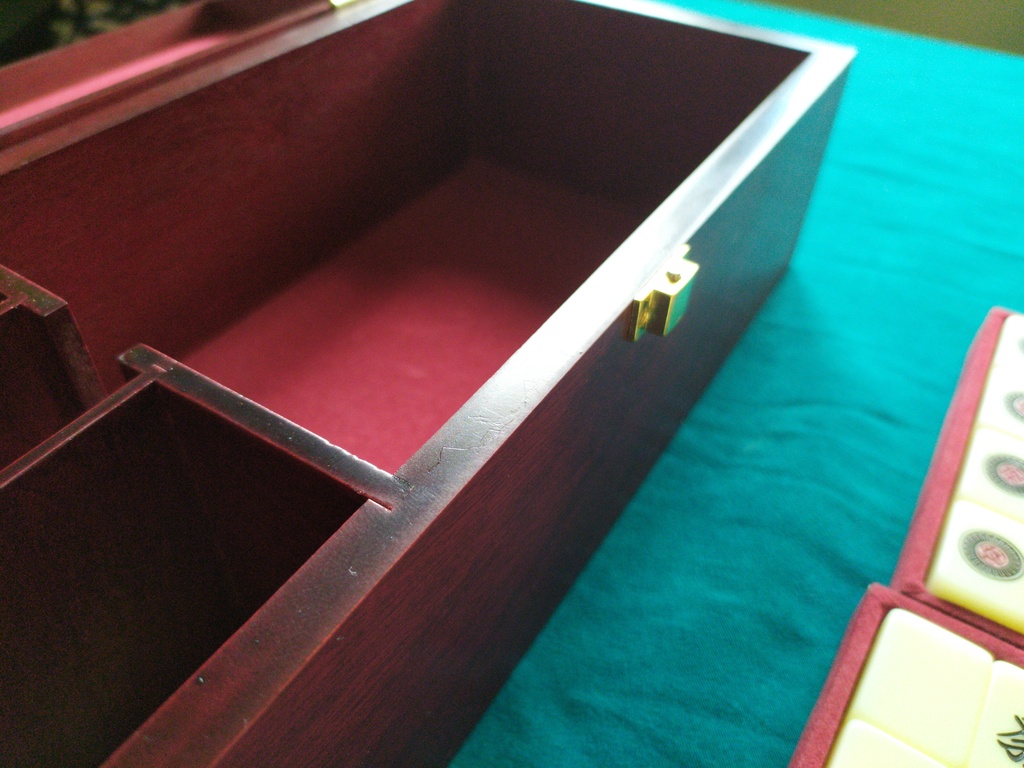 The box is closed with a single hatch. 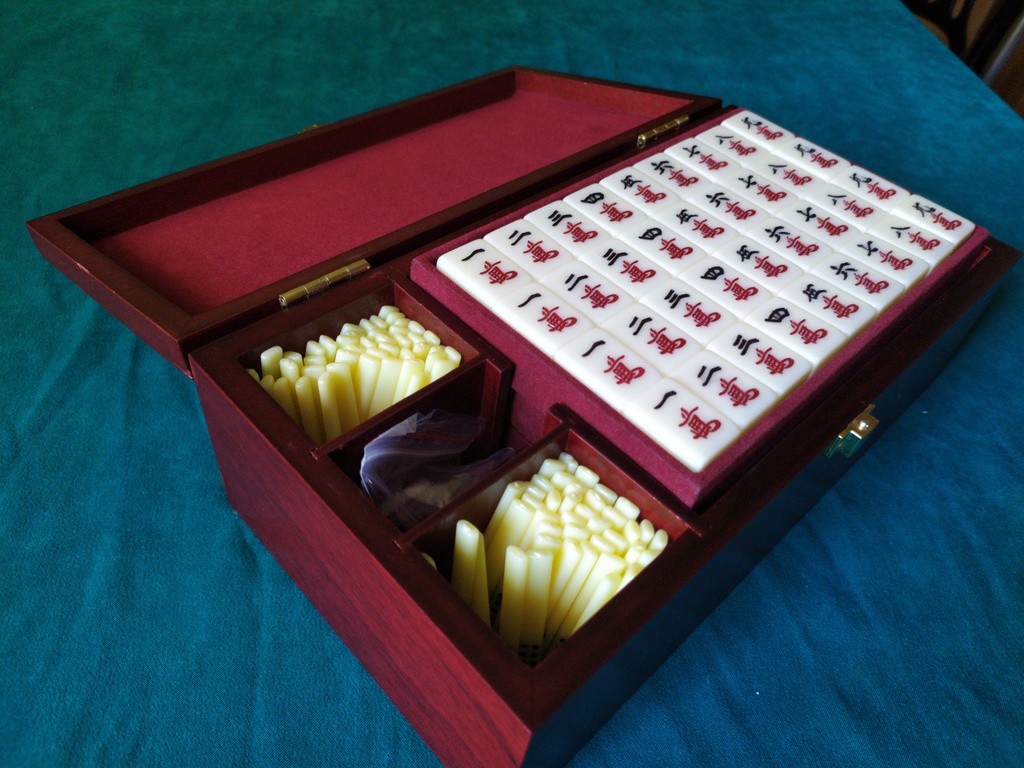 Accessing the tile trays is easy, as the middle compartment (meant for storing dice and the round marker) has a cut that allows for easy removal of trays, even all of them at once. 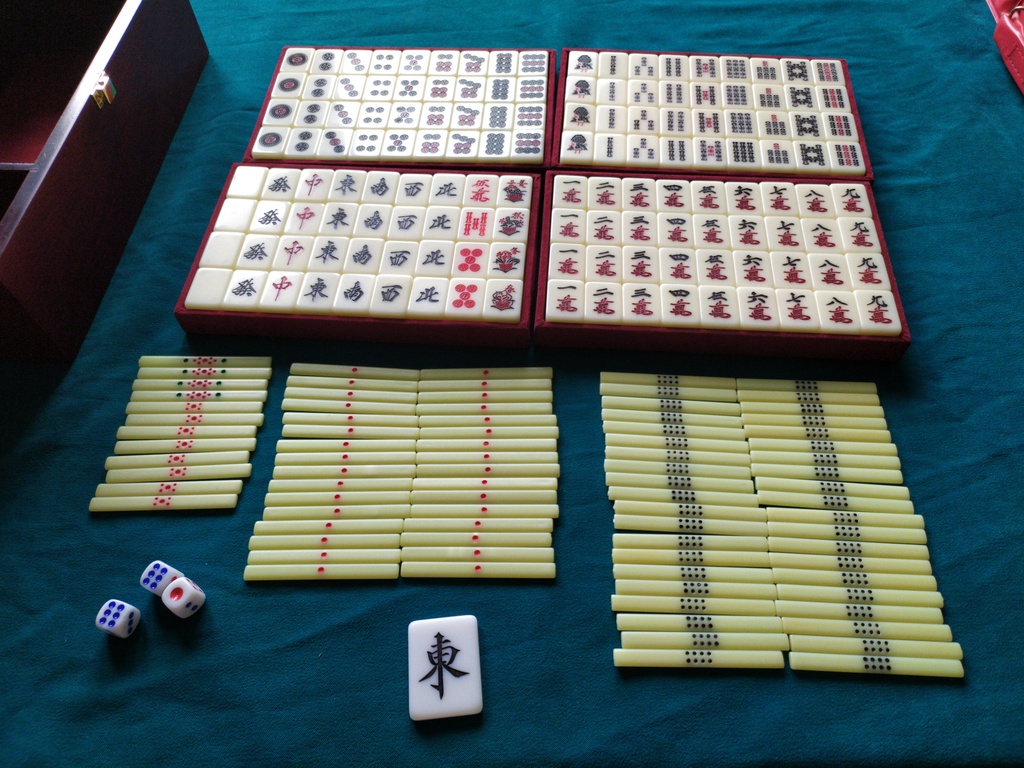 The tiles have a milky color and the scoring sticks are ivory-ish. Whereas Grapet tiles has red tile backs and is colored red, green and blue, tiles from the reviewed set are uniform and the tile markings are black and red only (except for red fives). The tile markings look rather pleasant. 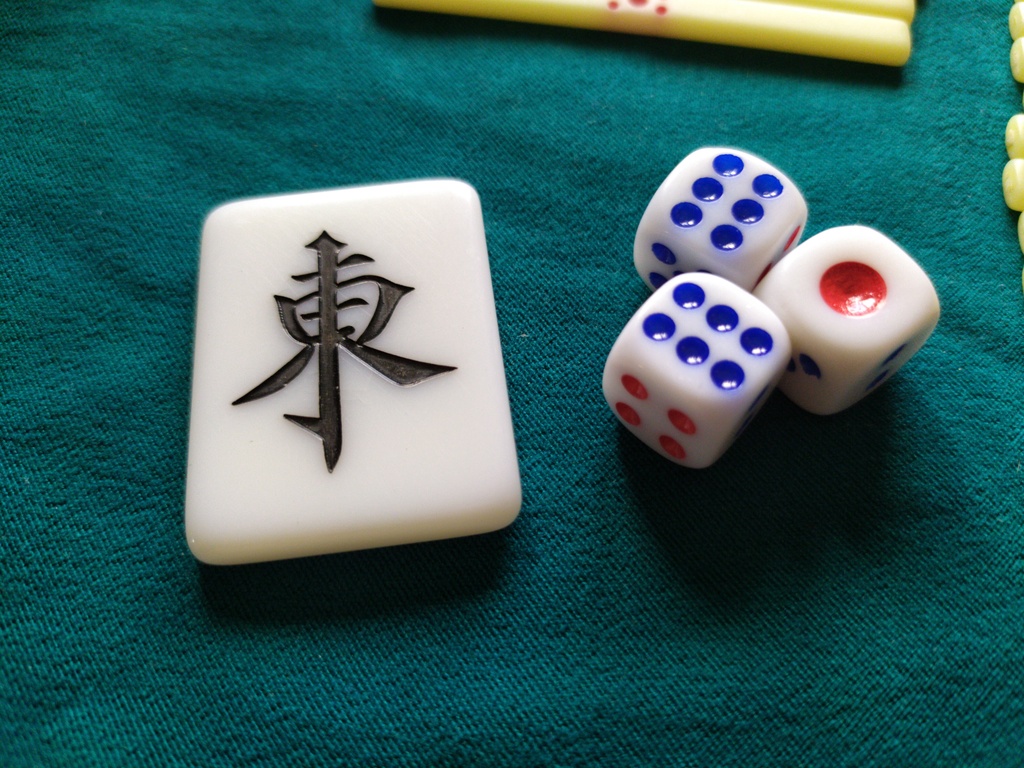 The dice are rather big for a Riichi set and the round marker is - unusually - vertical in shape. 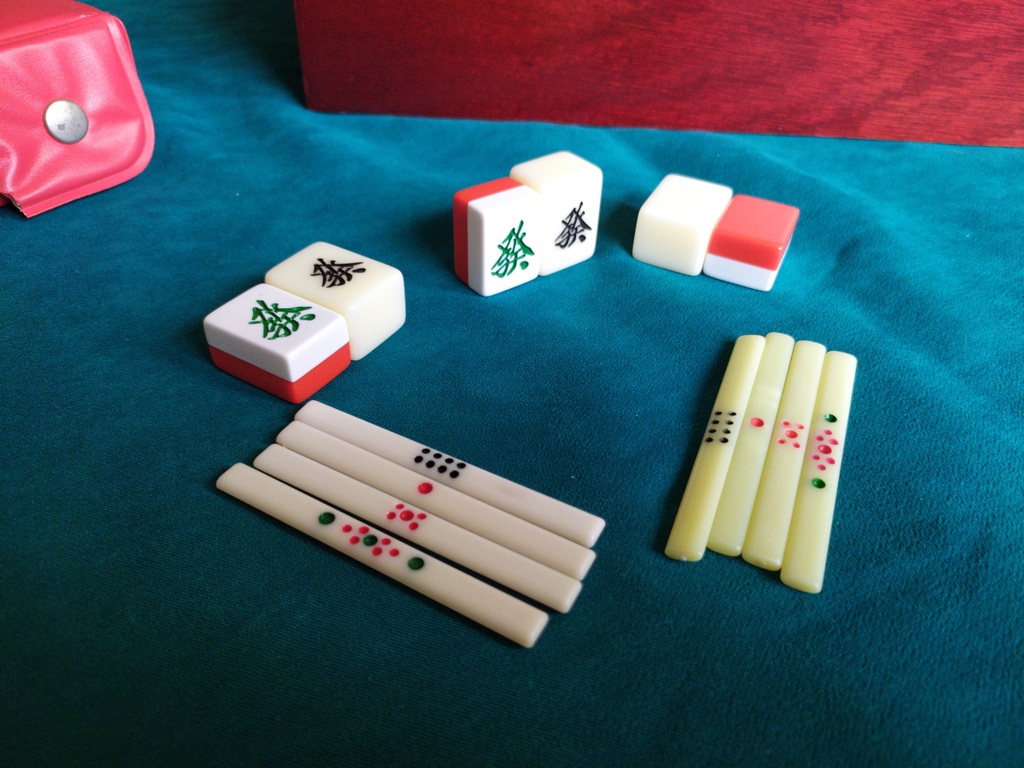 The tiles from this set are larger than the Grapet tiles and this is very noticeable when fiddling with them. There’s also a clear difference visible between Grapet snow-white tile fronts and the more organic hue of the reviewed set. 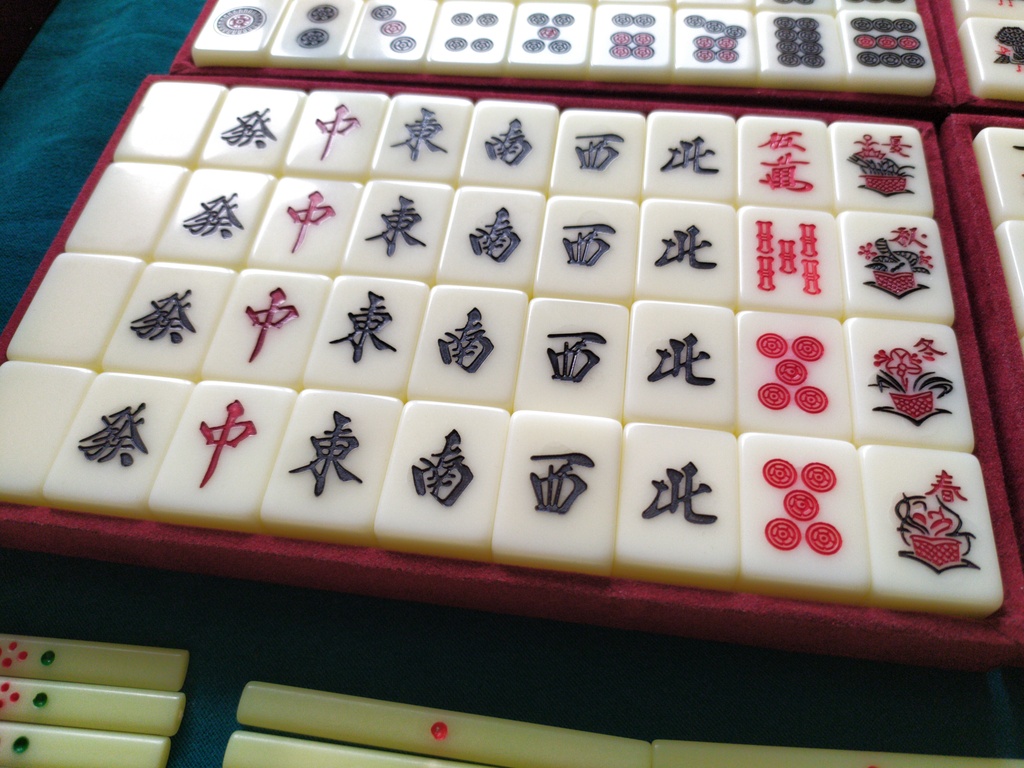 The paint on the red dragons differs in hue (the third from the top is much darker from the second and the fourth) and it’ll need some fixing. One of the red fives is discolored/has a red halo that I was unable to remove with acetone. (Luckily there’s a second one!) 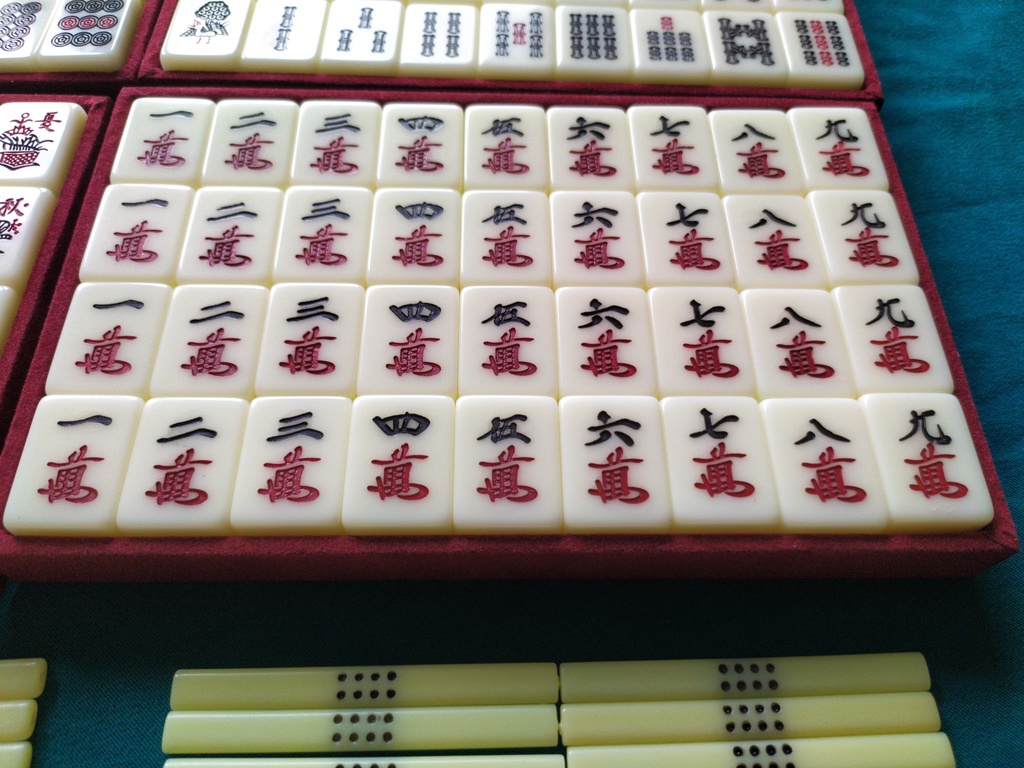 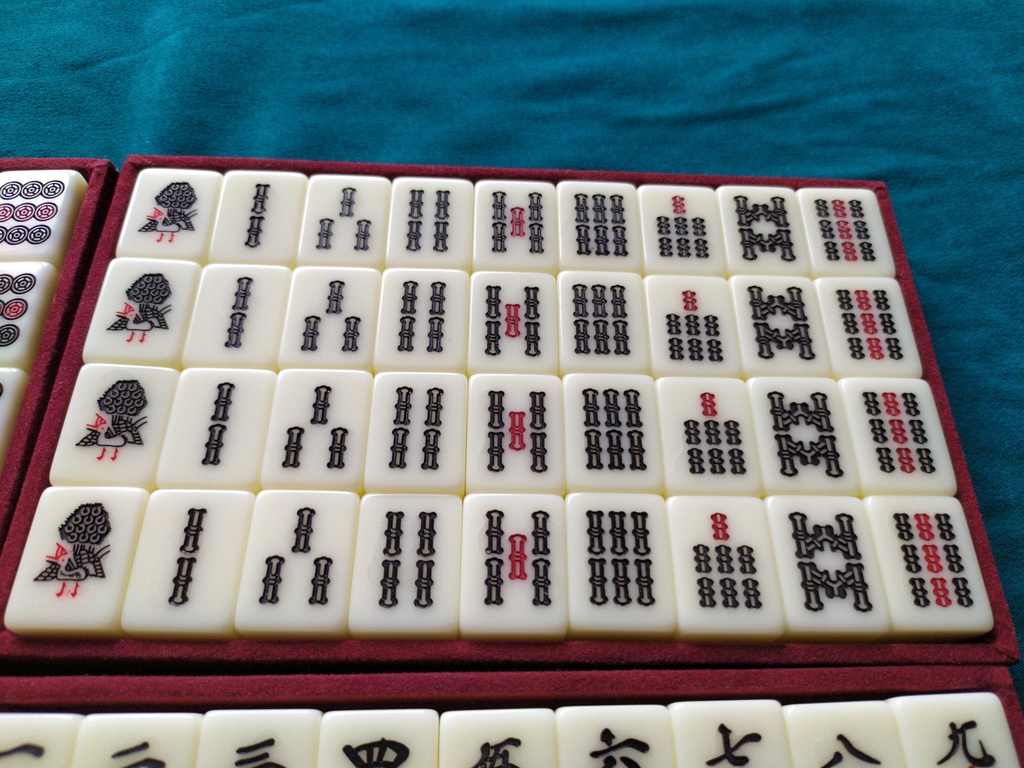 Trivia: in this set, the two, four, and six of bamboos are not centrally symmetric - one can see in which direction the bamboo sticks are pointed (just like in AMOS MAX). The majority of players won’t notice this fact, but some may feel compelled to rotate them in order to align them with the rest. 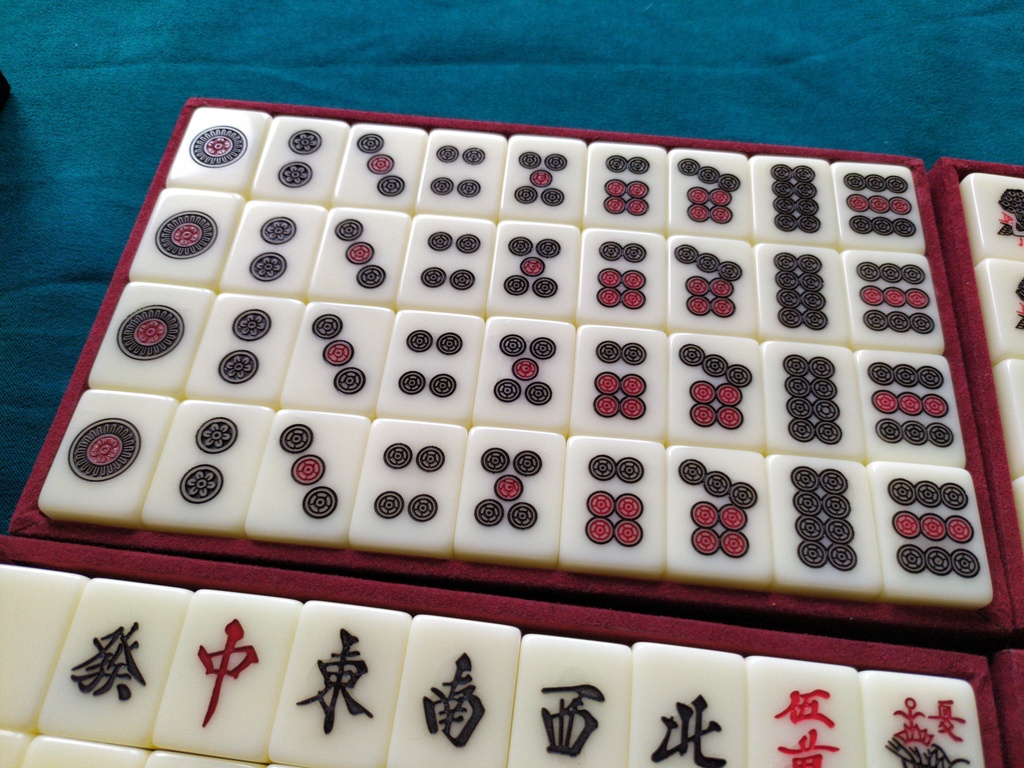 The circles look OK with one exception (can you see it yet?) - but more about it in the next chapter.

The tiles are of uniform color, which means that discarding white dragons in a cultural way requires an additional tile flip; another quirky situation happens when a white dragon happens to be a dora indicator, which is impossible to tell apart from the situation where the indicator has not been revealed.

These tiles do not have a weighted core and therefore are rather light when compared e.g. to the AMOS MAX tiles, which is heavily played in Kraków. All in all it’s a net benefit, since the wooden box that contains the tiles weighs a lot; putting even more weight in it could cause some logistic issues. Lightweighted tiles also give much less noise during tile mixing, which can cause people who like the “sparrow chipping” sound to frown and the people who prefer to play without annoying their neighbors to sigh with relief.

A huge upside of the set is that the tiles are absolutely even and building a wall from them is pure pleasure. It does not have a problem from the AMOS MAX tile set, where the tiles in the middle of the wall, despite being just as even, also weigh down a lot and can cause an airborne row of tiles to collapse; here, the wall can be raised and built even without a lot of experience in the art of tiling. 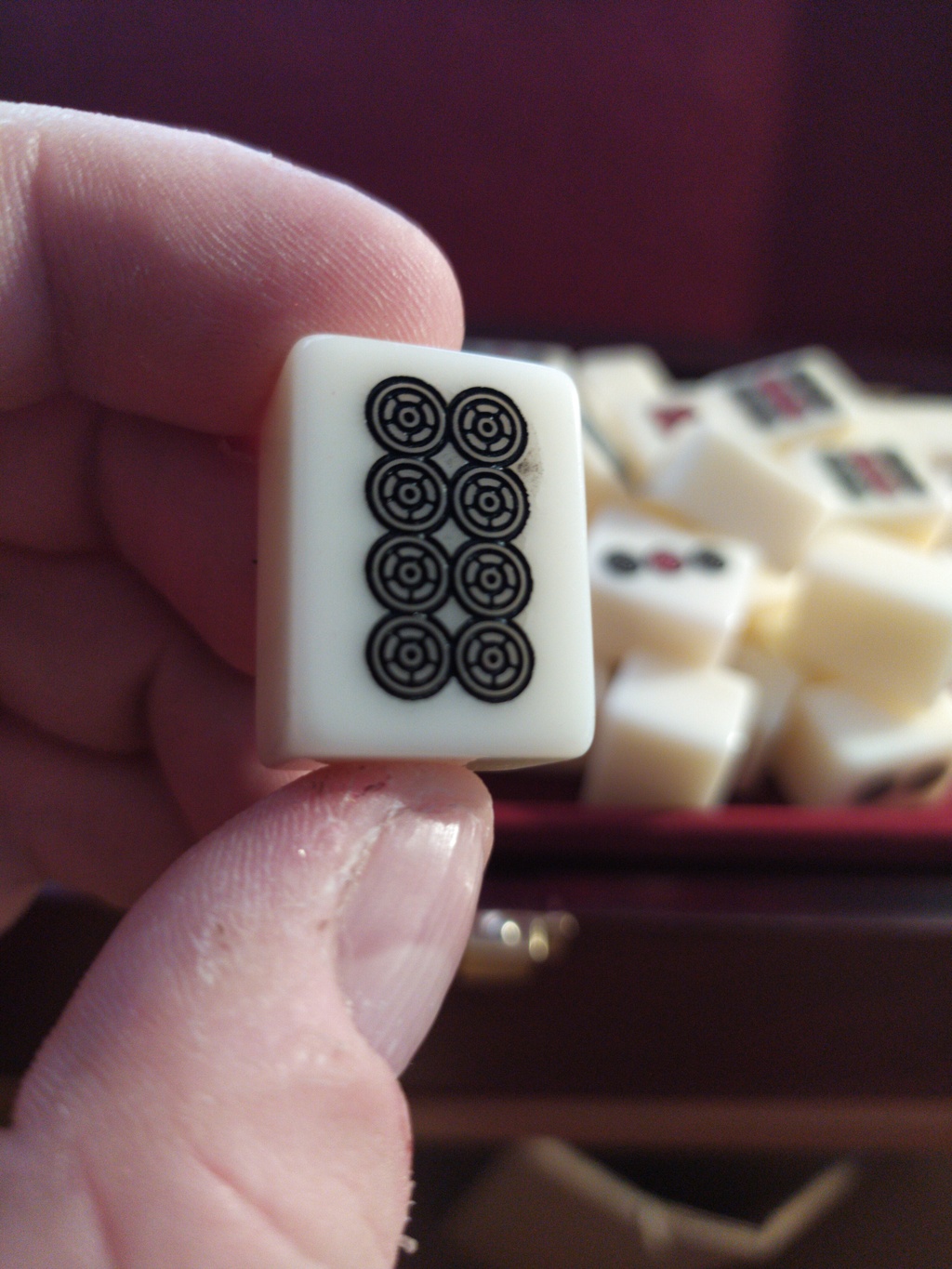 A small downside of the set is that some tiles are dirty with paint that has not been cleanly removed during tile production; I have counted about a dozen of them. I have managed to clean some of them using cotton swabs with acetone (warning, don’t rub too hard - it’s possible to remove the paint from inside tile carvings!), but most of them were immune to my cleaning attempts. 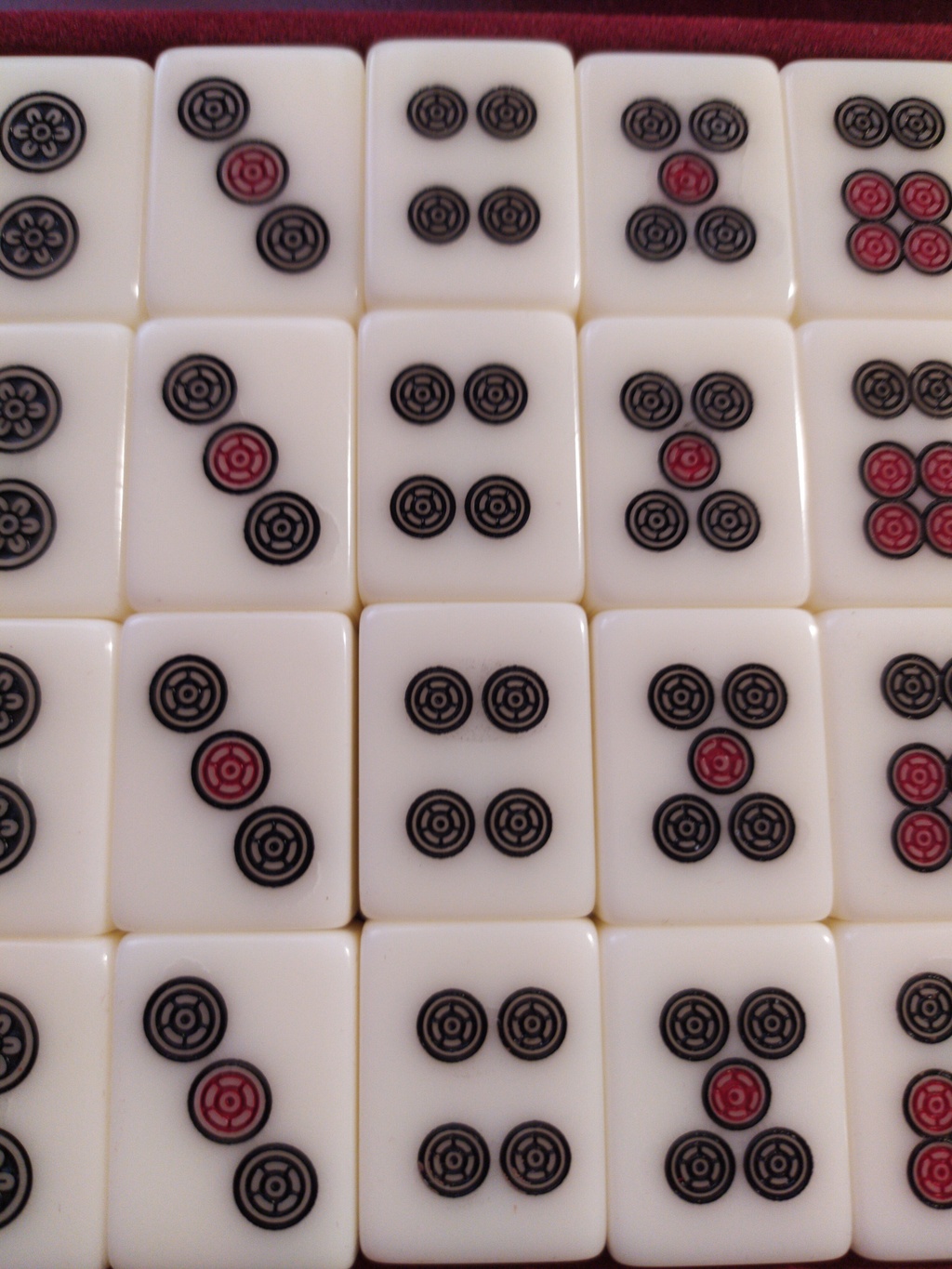 Other than for the dirtiness on the third-from-top four of circles, the second one has its carving off-center; furthermore, one can see small cracks of the material nearby the carvings (second-from-top three of circles, two topmost fives of circles). These two issues are the ones I consider to be the greatest; paradoxically it’s a plus, since all of the issues I found are practically unnoticeable during standard play. 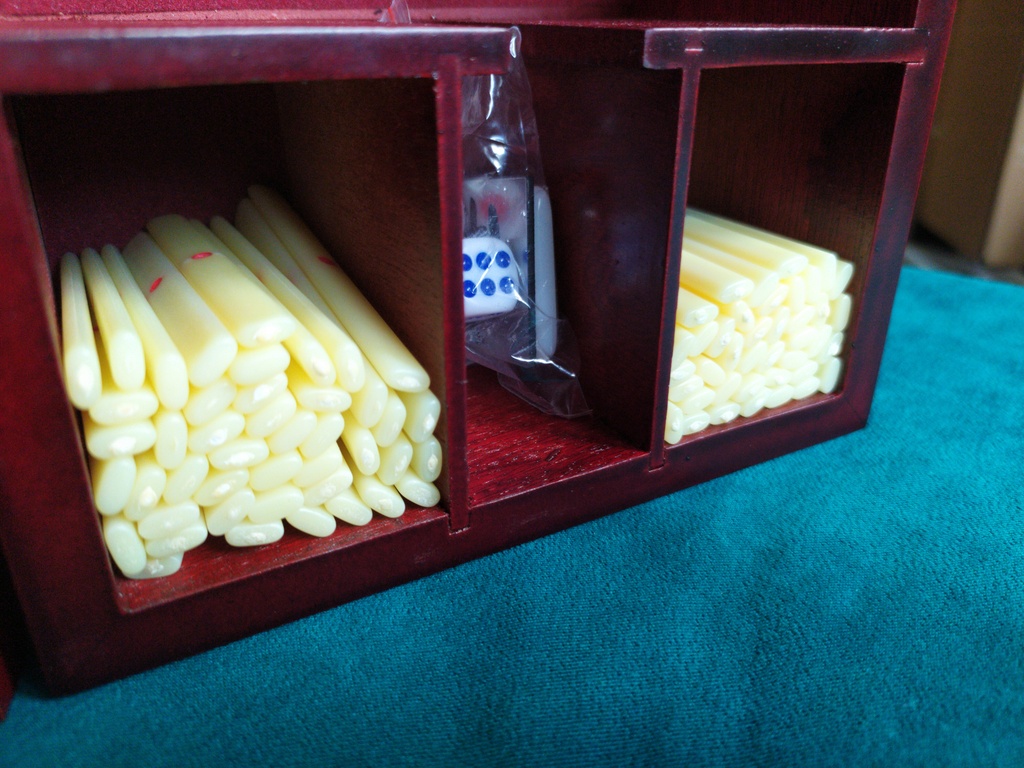 Scoring sticks have plastic “stumps” at their ends - remains from the production process. It should be possible to file them manually, or maybe exchange the counting sticks for another set; it is also possible to just ignore this problem, since this part of the scoring sticks is practically never visible during the game. 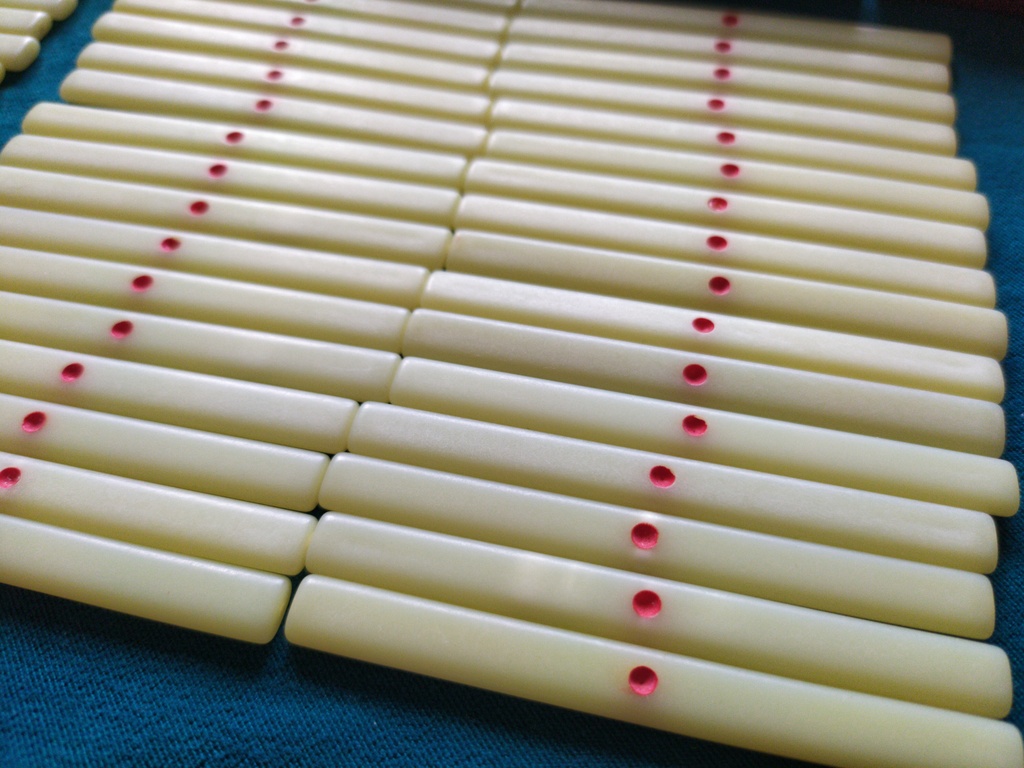 This photo shows small discolorations and missing paint near the markings of the scoring sticks. 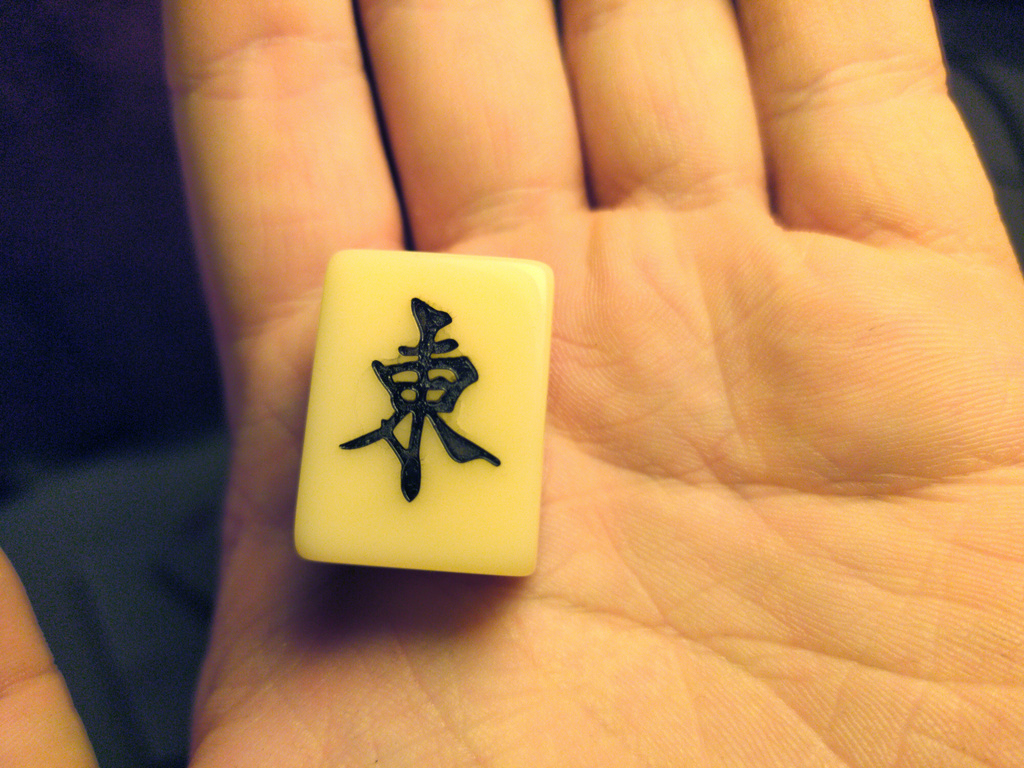 This photo shows something that I initially considered to be residual paint - but it turned out to be small cracks inside the tile’s material, near the regions where the East symbol was molded inside the tile. 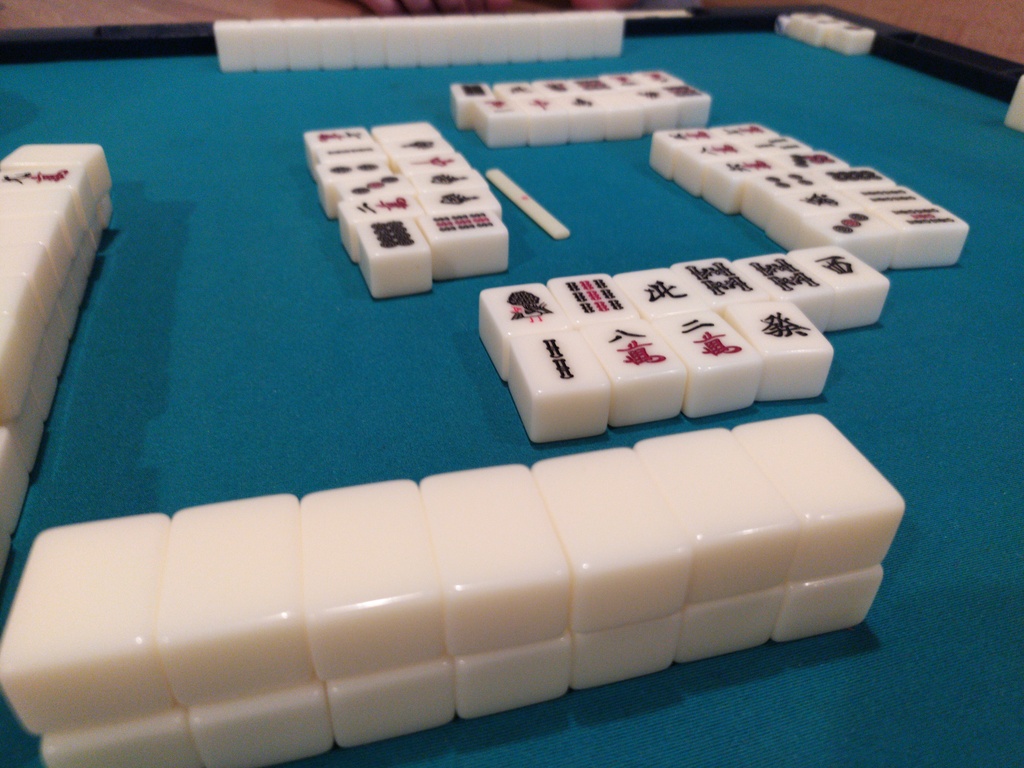 The tiles have been played one time by five people in total (including me) and our overall impressions were positive. The tiles are pleasant and smooth (even slippery!) to touch, it’s easy to mix and set them up. The aforementioned upside, which is evenness of the tiles, helps with setting up the wall.

I grew to like these tiles, even though I usually play with the heavier AMOS MAX set and that I am used to it. The quality of the tiles is good, also including the price of the tile set; another plus is an uncommon packaging in form of the wooden box. The aforementioned defects are only petty aesthetical issues and do not anyhow the pleasure one can get from playing.

I think that if someone, for whatever reason, does not want to import tiles from Japan (AMOS) or USA (Yellow Mountain Imports) and prefers to do their shopping in Poland, or possibly make a beautiful gift (while also offering a game of mahjong), I can surely recommend this set of tiles for that.

This tile set might not suit people who usually play with heavier tiles with weighted cores (e.g. the formerly mentioned AMOS MAX), or people who prefer tiles with clearly marked tile backs - but these are questions concering one’s habits and personal preferences.

You may also enjoy

We invite you to the first MERS tournament in Kraków!

We invite you to the first ever Polish tournament with Saki Cards! It will take place at 14th August 2022 in the Boardowa cafe.